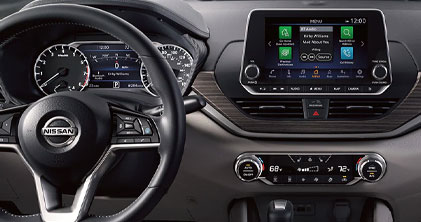 As a mid-size sedan, the Nissan Altima has been a strong addition to Nissan’s lineup. This model first debuted in 1992 and was previously known as the Bluebird. In the lineup, the Altima stands between the Maxima and Sentra and was first produced in the US just for sales in North America.

As the original Altima, the 1993 model was named Stanza Altima with a sticker that use the Stanza part of the name on the trunk lid. All trims used the same four-cylinder engine with a five-speed manual or four-speed automatic transmission. This model included stabilizer bars and a strut suspension.

Nissan included several options for buyers with power windows, an audio system and fog lights as well as a digital in-dash clock. Buyers who selected the SE trim got a sunroof and sport seats. Even in the 1990s, Nissan was providing advanced technology to appeal to buyers. This first-year Altima came with a head-up display for the GLE trim. The system provided speed information and warning lights on a little patch on the windshield.

Updates during this first-generation model were made by replacing style and amenity features with newer options. For instance, the digital clock became an option with all trims while the rear speaker grilles were replaced by a flat rear deck.

The second generation model was released in 1998 with a new cabin. Nissan provided four trims on the Altima with a unique look for each. While the XE was plain as the base model, the GXE held appeal for a diverse audience. Sporty design made the SE a favorite while the GLE provided a luxurious attitude.

Variable intermittent wipers were an added feature while other available amenities became standard. Safety continued to improve with side airbags installed to complement the driver and front passenger airbags. While the engine stayed the same, performance increased from 150 horsepower to 160 horsepower. A Limited-Edition Package was included with GXE with enhanced features such as power driver seat.

Nissan debuted the third-generation Altima in 2006. This model had a new platform and increased cabin space. The manufacturer also added a V6 engine. At the same time, the 3.5L four-cylinder engine increased power by five horsepower.

New style was seen in an updated cabin and new grille. All-red taillights were the standard while a navigation system was an option. These changes made the Altima competitive in its segment for the first time. It even moved the Maxima out of the midsize category into the luxury market because the Altima had become so successful.

A new generation was introduced in 2006 as the 2007 Nissan Altima with another new platform. Also new for this model was a redesigned front and upgraded rear suspension. Engines were revised for more power.

Technology continued to advance with Smart Key becoming standard while Bluetooth hands-free connectivity became an added option. Another optional feature was the rearview camera. Mid-generation Nissan Altima got a makeover with new headlights, hood and front fascia for the 2010 model year. The manual transmission was dropped completely after the CVT had already taken over as standard.

Two new additions for the Altima turned heads. The first was a coupe, two-door Altima with a slightly shorter length and height. Just two years later, this coupe had a new hood and grille with new headlights.

The 2013 Nissan Altima signaled the entrance of the next generation with both four-cylinder and V6 engines. This model had increased in size but reduced its weight for sportier performance. To showcase the sporty side of this sedan, the SR performance trim offered a sport cabin, decklid spoiler and SR logo floormats.

Mid-generation, the Altima had another facelift with the addition of Zero Gravity seats and new front and rear lights and bumpers. The five-inch color display was adopted as standard while buyers could add the remote start system. Connecting to the sedan became standard as well with Android Auto and Apple CarPlay.

Debuting in 2018, the sixth-generation Nissan Altima made another big change. Nissan replaced the V6 engine with the first production ready variable compression turbo engine for more efficient performance. Safety also expanded with ProPilot Assist, the first semi-autonomous driving assistant. Also, part of the package were features such as the Nissan Intelligent Around View Monitor and automatic emergency braking with pedestrian detection.

Learn more about the latest technology and amenities on the Nissan Altima when you visit Premier Nissan of Fremont. Stop in for a test drive and discover what makes this sedan stand out.